Intersections at Work: Understanding the Experiences of Culturally Diverse LGBTQ Talent at Work

Based on the findings of a survey of almost 200 culturally diverse LGBTQ workers, the report shows that the combination of cultural background and LGBTQ status or identity had an impact on over three quarters of respondents, with 55% reporting a negative impact.

The research also identified six common themes in how the experience of respondents played out: racism and/or homophobia; not being understood at work by people from the Anglo/white majority; the complexity of multiple and intersecting identities; working in regional or rural areas; working internationally in countries where homosexuality is criminalised; and feeling accepted at work but not at home. 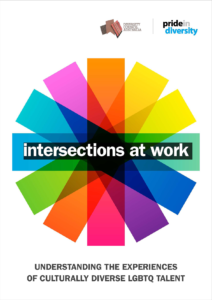 Pride in Diversity and DCA joined forces on this project as their respective research on LGBTQ workplace inclusion had revealed that culturally diverse LGBTQ workers had unique workplace experiences that warranted deeper investigation.

Our work with people who are culturally diverse and LGBTQ found that for some people, current workplace D&I initiatives aren’t addressing the nuances of their intersectional identities. We wanted to start addressing this gap by sharing the insights of culturally diverse LGBTQ workers about the actions Australian organisations can take to create more inclusive workplaces.

In supporting organisations that employ over three million Australians, it has become very clear that those who passionately identify and engage with communities that reflect a culturally and linguistically diverse heritage can face unique challenges when it comes to their LGBTQ identity, being open about who they are and also in their ability to fully experience and/or benefit from the positive impact of inclusion initiatives. These unique challenges have not until now been given a great deal of attention when assessing the overall effectiveness of workplace inclusion.

• 55% of respondents reported that the combination of their cultural background and LGBTQ status negatively affected their workplace experience, for 20% it had a positive impact, while for the remaining 25% it had no impact at all

• Common themes in how that experience played out included:

o Racism and/or homophobia;
o Not being understood at work by people from the Anglo/white majority;
o The complexity of multiple and intersecting identities;
o Working in regional or rural areas;o Working internationally in countries where homosexuality is criminalised; and
o Feeling accepted at work but not at home.

• What is locking culturally diverse LGBTQ workers out of inclusion at work, and how can we unlock this talent?

1. How do the cultural backgrounds of LGBTQ people impact on their experience at work?
2. What evidence-based actions can organisations take to create more workplaces which are more inclusive of LGBTQ workers from culturally diverse backgrounds?